Your browser is not supported. Please upgrade it to the latest version or download a freeware browser Chrome for correct working with website.

What is the deck plan?

A deck plan is a drawing of the future deck, which indicates its dimensions, the presence of railings, lighting, or a pool. Having a deck plan is important for the following reasons:

Deck plan drawing contains key information that will allow you to build a deck without unexpected difficulties. It usually contains several drawings: a simple top view and a dimensional drawing. A bird view is needed to visually demonstrate the appearance of the deck, markings for the direction of the boards (they can be laid along the deck, across or diagonally), and the placement of handrails and stairs. The following information is included in the drawing:

Disclaimer. Please note that these plans are just ideas and suggestions that you can take as an example to build your deck. They are supposed to help you get a better idea of what the drawing should look like and what should be indicated on it. We are not responsible for the use of any of these plans.

Below you will find a collection of free deck plans. Together with a free deck plan, you will also find a corresponding deck layout. These deck plans can give you a general idea of the deck frame design processes and techniques. You can learn from these plans how to build multilevel decks, decks with curves, second-story decks, etc. You can learn how to position deck beams, deck footings, joists, and stair stringers.

This is a 14x16x12 sized deck plan with one rung. This deck drawing does not plan the installation of the railing. 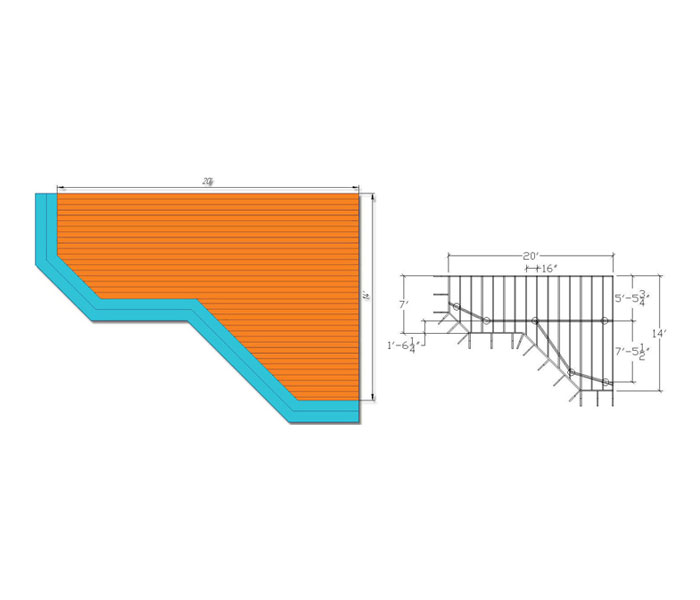 This is a simple one-level drawing measuring 7x20x14. Two steps lead to the deck. There are no railings in the plan. 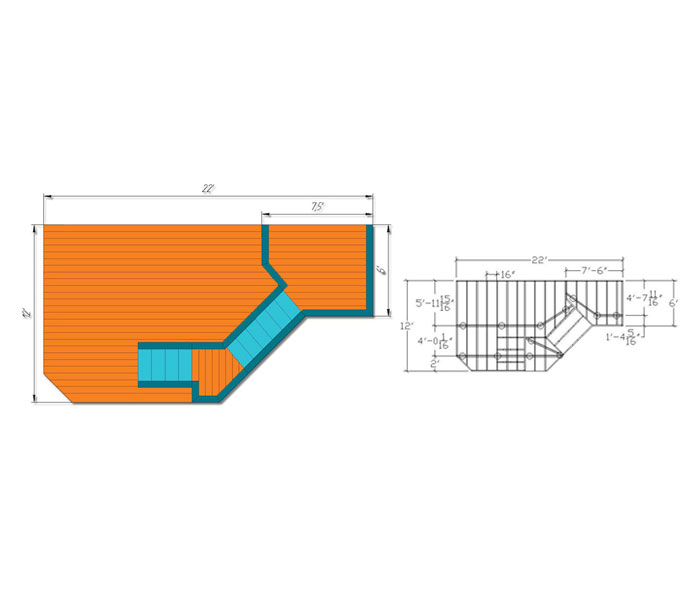 This is a complex plan with a three-tiered deck. The size of the deck is 12x22x6. The plan assumes two stairs. Railings are marked in dark blue on the plan. Here, railings are placed on stairs and upper deck levels. 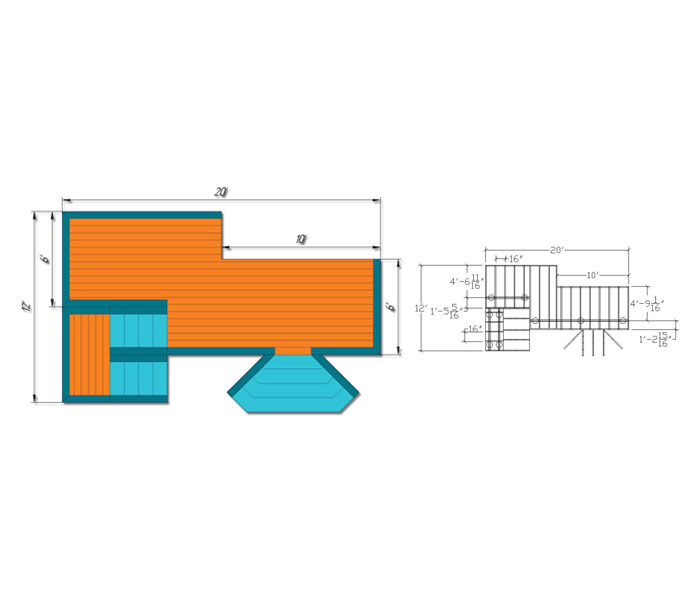 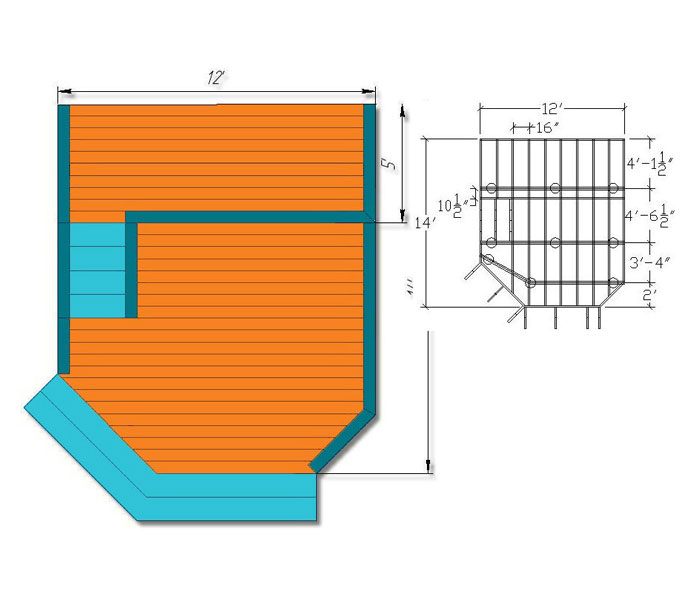 This is a 14x12x13 deck plan. A staircase with two steps leads to the deck. The plan shows the second level of the deck with a staircase of 4 steps. The size of the plan is based on a single board width of 16 inches. Railings are marked in dark blue in the drawing. They frame the deck along the entire perimeter, as well as along the stairs and the second level. 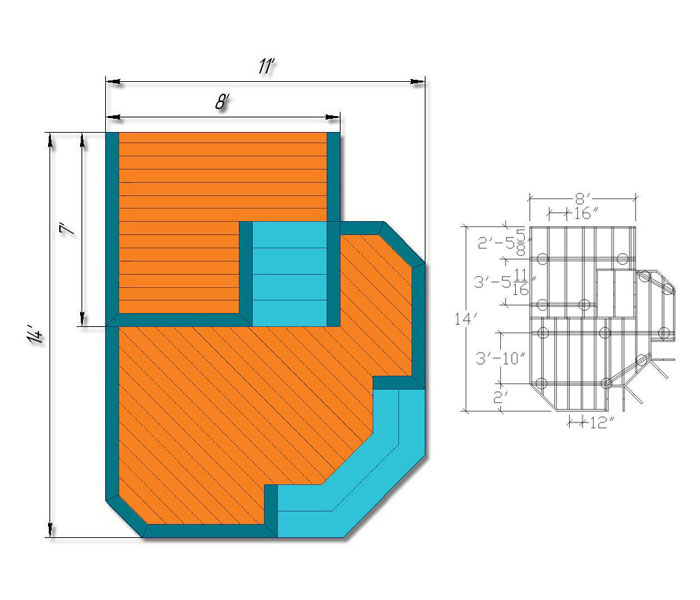 This is a blueprint for a deck with two levels, stairs, and railings. The size of the deck is 14x11. On the first level, the boards are laid diagonally, on the second level - across the deck. Railings are installed at all levels. 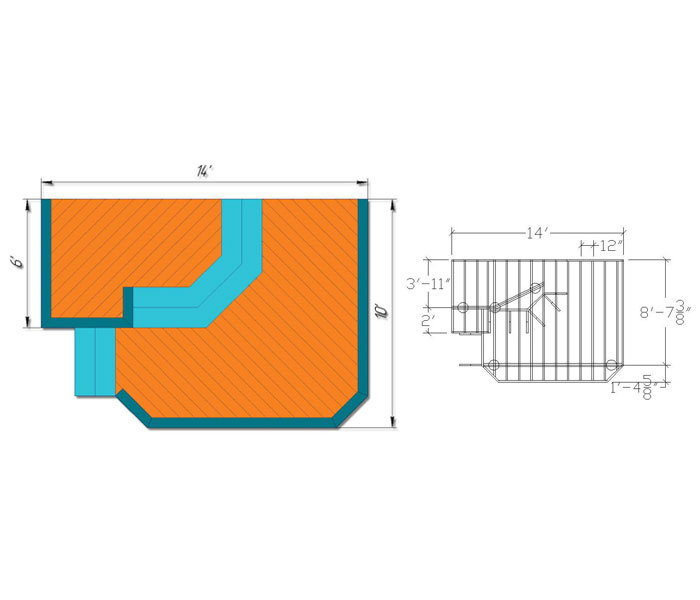 This is a blueprint for a deck with two levels. Its size is 6x14x10. A staircase with two steps leads to the first level. The boards are set diagonally from right to left. On the second level, the boards are placed on the opposite diagonal. Railings are located along the perimeter of the deck. 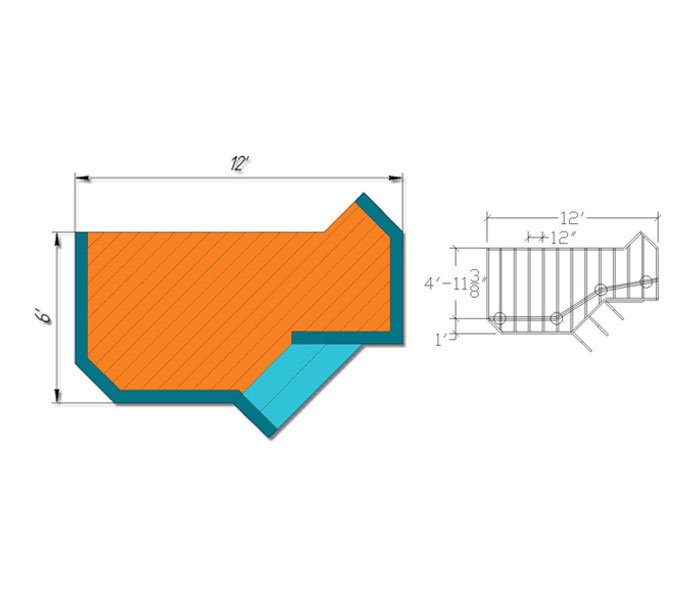 This is a simple drawing of a deck with an unusual shape. The size is 6x12. The deck is one level with railings along the perimeter. The installation of the boards is planned diagonally. A staircase with steps of different lengths leads to the deck. 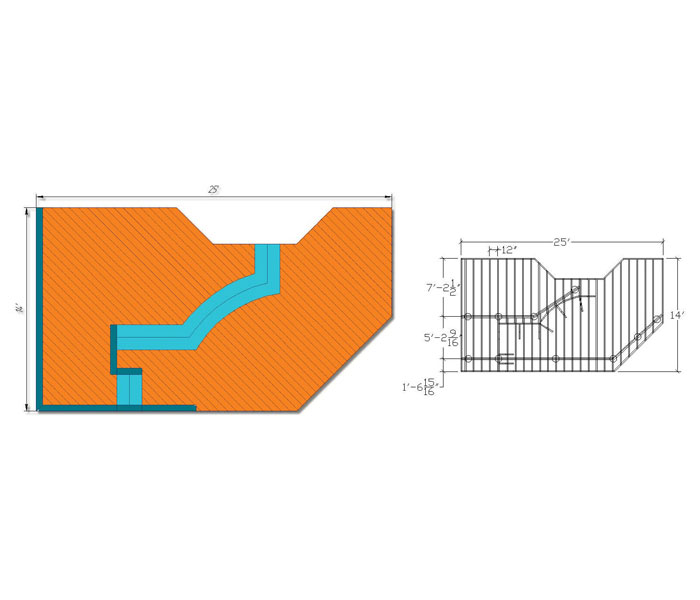 This deck plan is suitable for a large house. Its size is 14x25. There are two levels in the drawing. Two staircases lead to the second level. The central staircase is planned with a smooth curve. The railings are located on the second level. 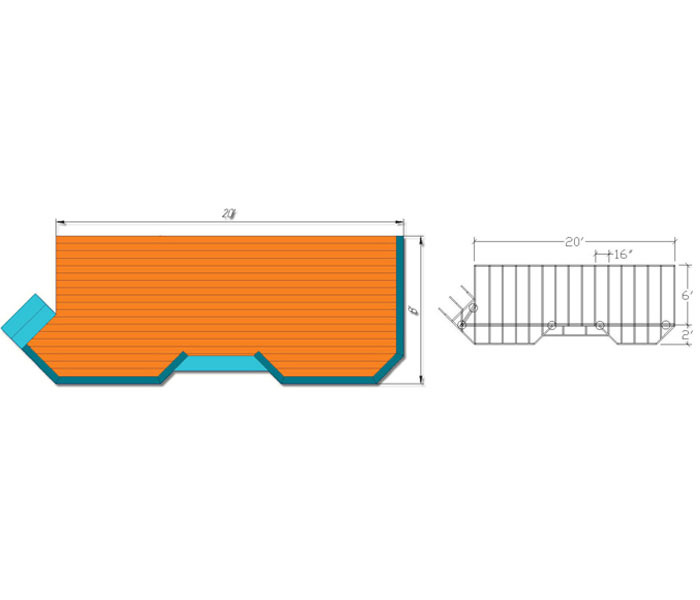 This is a simple blueprint. It depicts a deck with one level. Two staircases lead to it: central and side. The size of the deck is 20x6. Railings are installed along the perimeter. Boards are located along the deck. One plank is 16 inches wide.

Remember that to install the deck, you need the local municipality to approve the plan. Only after the authorities agree that the plan meets the requirements of the National Building Code of Canada and Ontario Building Code you can build a deck.

Decks Toronto offers you a specialist who will take all measurements and draw a deck plan according to your tastes. This plan will be unique and allow you to include any elements. You don't have to waste time with it. You just have to bring the plan and other documents to the local municipality and get permission to build the deck. Order a permit drawing service in Decks Toronto and get accurate ready-made drawings!

Product has just been added to cart

Such user is already registered

to enter another data to log in to continue

YOUR ORDER WAS NOT PROCESSED

Unfortunately there was an issue processing your order. Please login you account and try to process your order again or call our office at 416 623 7158. You can also e-mail us at info@deckstoronto.com